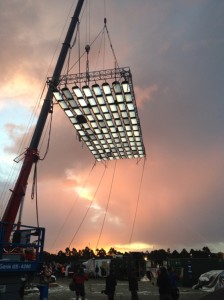 At Tri-Point, we consider ourselves to be the Australian film rigging specialists.  Since our inception in 1998, we have managed the rigging on most major film productions in New South Wales, Victoria and Queensland.

We’ve rigged challenges for television shows such as Australia’s Next Top Model, The Biggest Loser and Master Chef. We’ve also worked on hundreds of television commercials and music video clips.

The Tri-Point Directors were all career Riggers before moving into film, and we have drawn from this diverse experience base to develop our film rigging expertise. With Tri-Point co-ordinating the Rigging for your production, you are ensured that the rigging will be safe, reliable, installed on time and cost effective.

Tri-Point can be involved from below the floor (with tank set ups) up to the roof grid. We can design, supply and install your rigging.

We work with the following departments:

Dave Hird, Warren Jones and Graeme Dew have over 70 years of Rigging Experience between them with more than 40 of those specialising in Film Rigging.

They have provided gear, and co-ordinated the overall rigging for The Wolverine, The Hobbit, Farscape Series I, II & III, Potato Factory, Bootmen, Mars Red Planet, Moulin Rouge, Where the Wild Things Are, Ghostrider, Stealth, House of Wax, King Kong, Avatar, The Matrix Triolgy, The Pacific, The Knowing, and numerous other films and television shows.

Graeme Dew was Rigging Coordinator I’m a Celebrity 2009-2014, The Quiet American, Matrix 2 & 3 and the final installment of the Star Wars prequel.

David Hird was Rigging Coordinator on Stealth, Where the Wild Things Are, the Wolverine and Gods of Egypt.

Directors are available to be employed individually as Rigging Coordinators, or as advisers on specific projects. Please contact our office on 02 9666 4642 to discuss their availability.