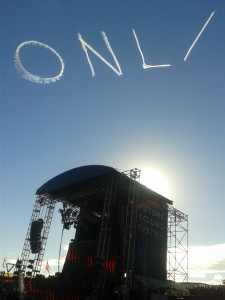 Tri-Point boasts an extensive range of CLS and Tomcat branded aluminium concert truss, a large variety of electric chain hoist motors and manual chain blocks ranging from 250kg to 2 tonne in capacity, as well as multiple warehouses up and down the East Coast full of specialised rigging equipment to suit a variety of purposes from ground supported truss systems to venue flown lighting grids, and production rigging to stunt and aerialist performance rigging.

Our staging and rigging equipment has been used to service many Australian Concerts & Festivals, including Future Music Festival, Soundwave, the Eminem Rapture Tour, the Rolling Stones, Stereosonic, Summafieldayze, Fat As Butter and Aerosomith/Stone Festival, to name a few.

For more information on our staging structures, please CLICK HERE to view our stage systems.

With a large pool of experienced and ticketed crew, Tri-Point provides scaffolders, riggers, forklift drivers and EWP operators as part of their first class labour services, which can be hired as part of an installation of Tri-Point equipment, or solely as a labour hire to assist production rigging on major shows and events. We proudly provide safe, reliable rigging, scaffolding and staging to the entertainment industry throughout Australia.

Our expertise is knowing all Entertainment Riggers Australia wide and being able to attract the right crew to the job. Our crews have a balance of experience and enthusiasm and work with a safe attitude, with the mind set of getting the job done safely and quickly.

The Tri-Point’s Directors all have a solid background in Concert Staging and Rigging:

GRAEME DEW was Touring Crew Boss for Dave Matthews Band, Linkin Park, Metallica and  many other stage systems over a period of more than a decade, all over the world.

WARREN JONES was Touring Crew Boss for various stage systems throughout the US, Europe and Australia/NZ, toured with hundreds of bands through the 80s and 90s, and was the Touring Rigger for U2 from 1985 to 1998.

DAVE HIRD toured as a Staging Rigger throughout Europe, the US and Australia/NZ through the early 1990s.