Tri-Point have been busy recently working on not one, not two, but three feature films simultaneously.
The Moon and the Sun, featuring Pierce Brosnan, Bill Nighy and Fan Bingbing has wrapped filming in Melbourne following a 3 month shoot. The Chinese-American Co-Production featured elaborate sets, all built under challenging timelines. Henry Richards was head of Rigging Department. Tri-Point provided black drapes, blue screens, truss packages, tab track, scaffold support and span decks for all of the sets at Docklands Studios. Vanessa Edwards, Tri-Point’s Operations Manager handled all of the account management from Tri-Point’s end, ensuring all gear was delivered on time. The fantasy film, based on King Louis XIV’s quest to find a mermaid, will be in cinemas by 2015.
Gods of Egypt, featuring Gerard Butler and Nikolaj Coster-Waldau, is currently wrapping up filming at Fox Studios in Sydney, with location shoots including Auburn Pool and Centennial Park. Tri-Point Director, David Hird, was the Rigging Coordinator for the film, and Tri-Point provided scaffold and decking, camera platforms, truss and rigging to the film. The film has been directed by Australia’s Alex Proyas. In typical Proyas style, Gods of Egypt will be heavy on visual effects and imaginative plot twists. During the film, Tri-Point provided bespoke 400mm Box Truss platforms for SFX Department, Set Support platforms on rolling castors for Construction Department, Overhead Scrim Rigs flown from cranes for the many location shots, as well as lighting and blue screen support for all of the sets.
It’s been great to see a full crew back at Fox Studios again, and it’s always a pleasure to work in the world class facilities at Fox.
San Andreas, a disaster movie, featuring Dwayne “The Rock” Johnson, wrapped principal photography this week at Village Roadshow Studios on the Gold Coast. It’s been a big, elaborate shoot for our rigging team, headed up by Tri-Point Director Graeme Dew.  Working with Gaffer Reg Garside, and Key Grip Adam Kuiper, our truss and scaffolding has been busy since April. We constructed a cantilevered StageCo buttress truss system to support a massive sail over the outdoor tank at the studios. We’ve used our largest green screens to construct a 270’ x 40’ Green Screen stage for a gimble set, we’ve blacked out aircraft hangers, flown numerous overhead scrims from cranes, and provided camera platforms, divers access platforms, and outdoor green screen scaffold walls.
A big thank you goes to our hardworking rigging coordinator Ross Buter, and to the rest of our team who have done a great job. San Andreas will be in cinemas in early 2015. Look out for a sneaky cameo from Australia’s own Kylie Minogue! 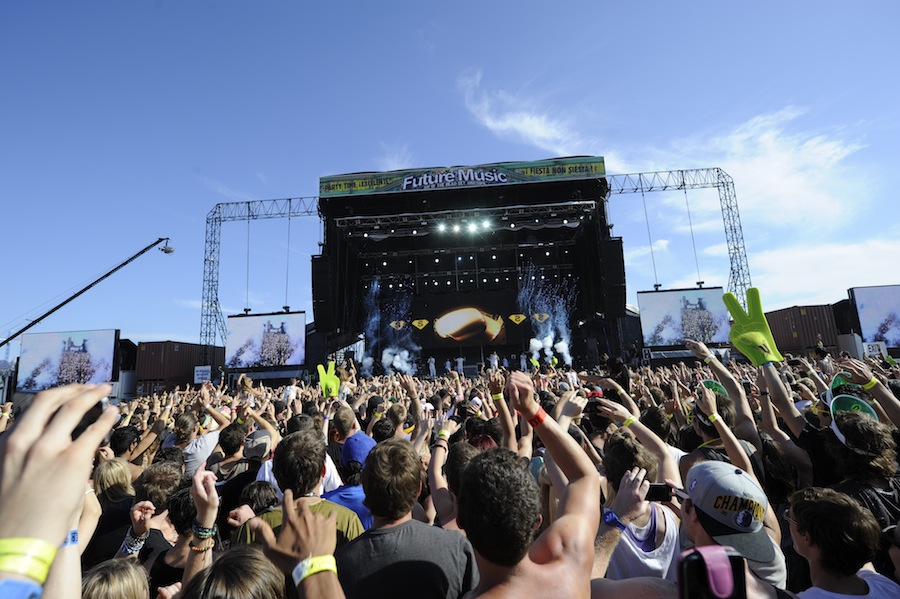