The first Australian Event Awards Ceremony to take place on the Sunshine Coast kicked off with a bang this week, recognising and celebrating the best events in Australia and achievements in the industry around the world between 1 July 2015 and 30 June 2016.
Among this year’s winners was a balance of Event Awards veterans and first time finalists. Byron Bay Bluesfest won Best Regional Event, Ample Projects won Best Achievement in Design for their work on Be The Light For The Wild, Taronga Zoo for Vivid Sydney 2016, and Imagination took home the gong for Best Technical Achievement for their work on Spirit of Anzac Centenary Experience.
It was an honour to see Opera Australia take out the award for the Best Cultural, Arts or Music Event for this year’s Handa Opera on Sydney Harbour: A Production of Turandot. We are proud to be a part of this landmark event, delivering the main stage steel & scaffold infrastructure on the waters of Sydney Harbour at Farm Cove annually since 2013.
After a classy VIP cocktail reception on the lawns, with a firework demonstration from Foti Fireworks, we headed into the beautifully decorated marquee for dinner and the awards ceremony.
Awards Partner, Apples and Pears Entertainment, provided two brilliant acts to entertain attendees. With Sarah Rowan-Dahl creating a stunning artwork through the evening as the show rolled on around her, and Kimberley Heberley’s beautiful voice providing a sweet prelude to the main course. Meanwhile, drumming outfit Junkyard Beats contributed the show-starting bang.
Click here to see the full list of winners.
Tri-Point are Proud Sponsors of the Australian Event Awards.

The Event Awards 2016 is Almost Here!

The Australian Event Awards is the pinnacle awards program for the events industry in Australia. The program is guided by ongoing industry consultation to answer the need for cohesiveness across the entire Australian industry, to develop industry identity and to assist Australian operators in cross-development of opportunities between events and event disciplines.
The program is all-inclusive, being open to all Australian events, event managers and support service providers regardless of:

It is the only opportunity for Australian events and event organisers to be acknowledged on a level playing field, across the entire national events industry.
For the first time this year, the Event Awards takes it’s annual Awards Ceremony to the Sunshine Coast, to be held on Wednesday September 21 2016 at the Novotel Twin Waters Resort, Queensland.
To view a full list of the finalists, the winners of which will be announced at the black tie ceremony on Wednesday, click here to be taken to the Event Awards website.
Tri-Point Rigging Services continues a long relationship as a Proud Sponsor of the Australian Event Awards.

My role at Tri-Point Rigging Services is…
I process wages, pay invoices, raise invoices and general accounting.
My favourite project to date was…
I don’t work on any project directly but really enjoy going to final rehearsals for Opera on the Harbour in March each year!
When I was a kid, I wanted to be…
A psychologist which, in hindsight, may have been helpful sometimes…..
The best advice I have ever been given is…
Treat others as you would like to be treated.
My first job was…
McDonalds. I was 14 and 4 months…
My favourite artist/band of all time is…
There isn’t one in particular but I like rock, so probably The Rolling Stones or Queen. Or maybe INXS…
Three people I wish I could invite to dinner are…
Hugh Jackman, Dr Karl Kruszelnicki, and Michelle Obama.
Most people don’t know that I…
Have been at Tri-Point for 10 years now!
Three things I can’t live without…
My husband and two children of course! 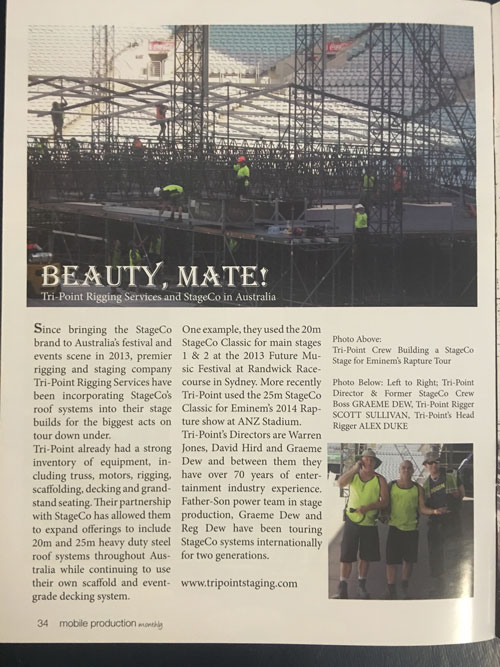